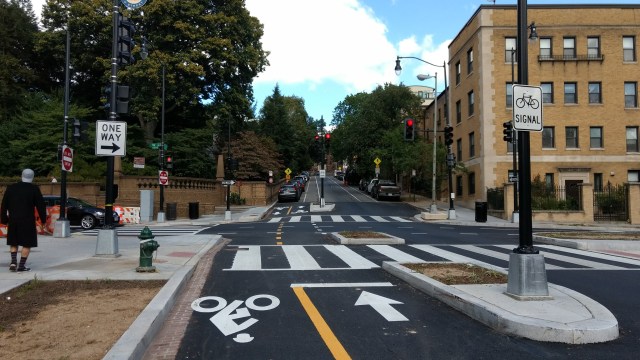 At the May 7th, 2019 Legislative Meeting, the Vision Zero Enhancement Omnibus Amendment Act of 2019 was introduced. The bill, among other things, does the following:

I'm very excited to be co-introducing the Vision Zero Enhancement Omnibus ​Act with Councilmember Allen and my colleagues.

This bill would finally codify the MoveDC plan for multimodal transportation improvements and would require a standardization of DDOT's project selection and delivery process.

Doing so brings our goal of zero deaths and fatalities on our roads into much better alignment with our various transportation planning efforts.

It will also go a long way towards living up to our stated ideals on safe, livable streets.

That safety is something every one of our residents deserves, but many don’t receive. As we’ve seen, DC’s Black and Hispanic residents and those living in lower-income communities are most frequently at risk of death or serious injury on our roads and sidewalks. Women and people of color are also the fastest-growing groups of bicycle commuters.

I wish we could have done the work years ago that would have saved those and many other lives. But this bill is a significant step in fulfilling the policy commitments I made in that letter to the Mayor, along with other bills the Council is now considering.

A continual source of frustration for my constituents, myself, and many of my colleagues on this council, is the frequency at which projects are watered down or abandoned at the first sign of resistance.

Improving our streets to the standards of a twenty-first century city will save lives, build more thriving communities, and move us towards our sustainability goals to avoid climate crisis.

This bill will empower DDOT to do the work it needs and will require us all to take this mission seriously. I look forward to working together as a Council to advance this legislation.